I just completed by first experience decorating  for a wedding open house.  It was held in a church gym. It was a large, empty space that needed to be warmed up, but on a budget.  I had a lot of fun finding ways to decorate and keep it inexpensive.  I still don't have a nice camera and with the lights turned down low, these don't quite capture the charming, intimate feel we achieved.  Hopefully, you can still get a sense of what it was like. 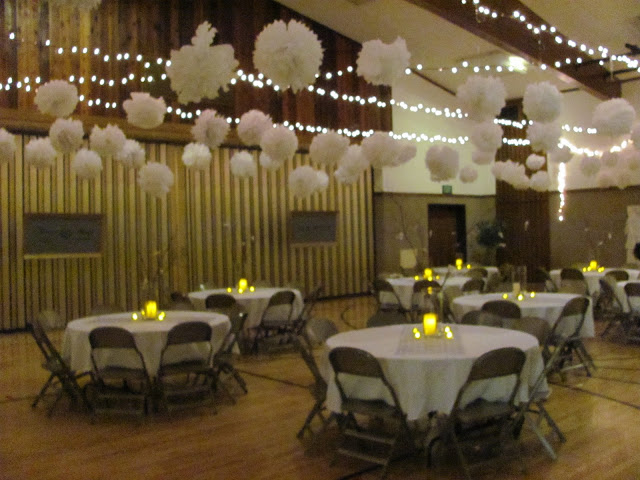 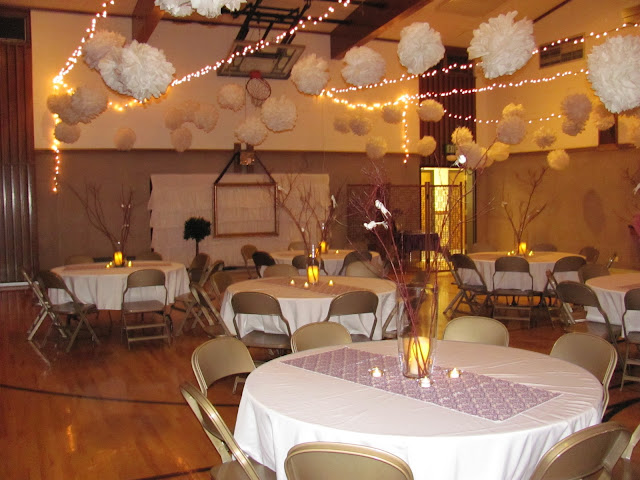 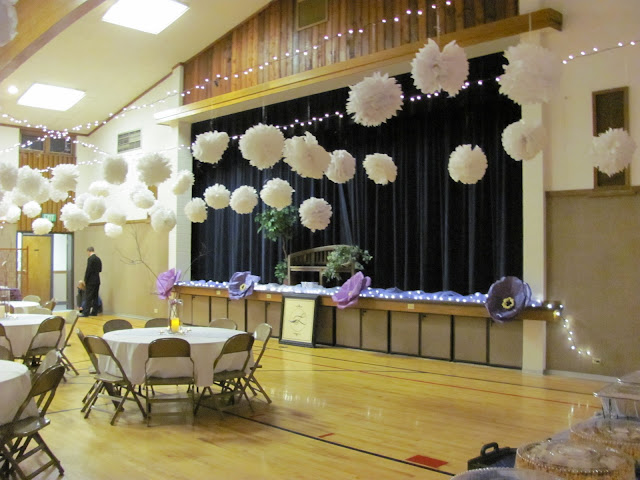 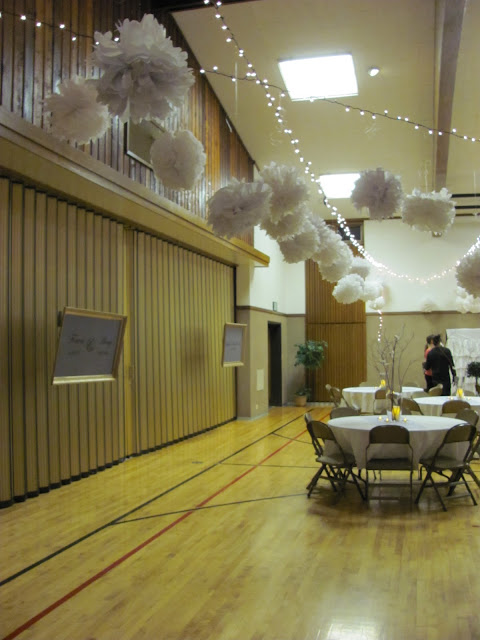 To bring down the ceiling, we strung white lights back and forth across the gym and then hung 100 tisssue paper poofs from fish wire and paper clips. Some amazing friends helped fold and cut the tissue paper and then the day before the set-up, helped again to poof them all out (they take up a LOT of space so we couldn't do it too far ahead.) A couple days after Christmas I was able to pick up HUGE packs of white tissue paper at Costco for next to nothing. For instructions on how to make the two styles of poofs, I used THIS link. 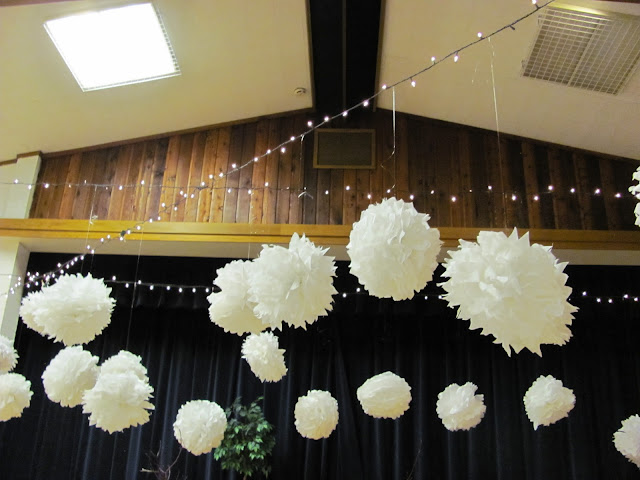 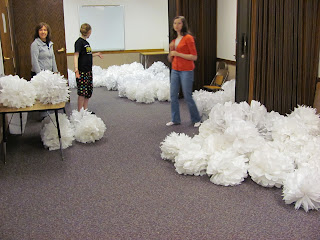 The bride chose purple as her accent color so we made table runners from a fun purple damask pattern from fabric.com.  We used clear vases (mostly from TJ Maxx because they were all under $7!) and used battery-powered candles (purchased at Costco around Christmas for a crazy-good price) and dogwood branches from my yard.  I needed to prune my bushes anyway and just had to wait until the cold winter turned them that lovely red.  We ordered these beautiful birds from Floral Trims.com. 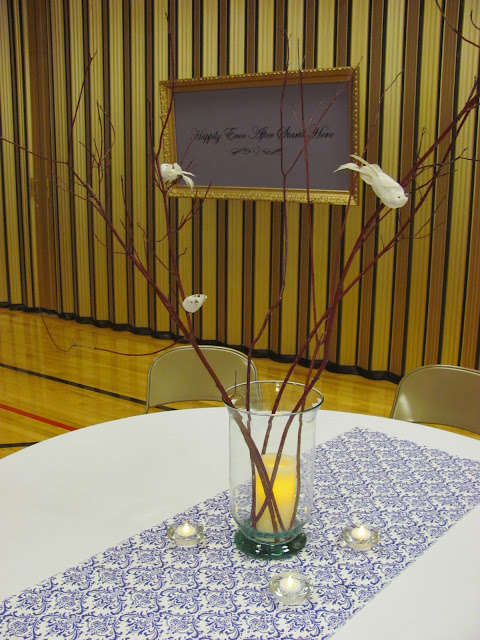 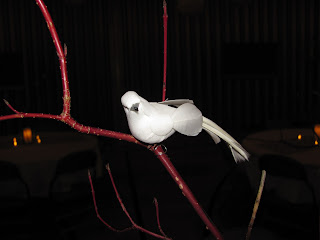 I found a huge lot of glass votives at goodwill and we used battery powered candles in them.
Since we had a stage to work around, we chose to use it.  I placed a garden bench and a few silk plants and had all the wedding gifts placed on and around the bench.  Across the front of the stage, we wrapped LED lights in purple tulle for a  nice "fairy" effect.  I made Four large paper flowers to dress it up further.  They really weren't that hard to make and I once again took advantage of the after-Christmas sales and found the purple wrapping paper on clearance.  I followed THIS tutorial to make the over-sized flowers. 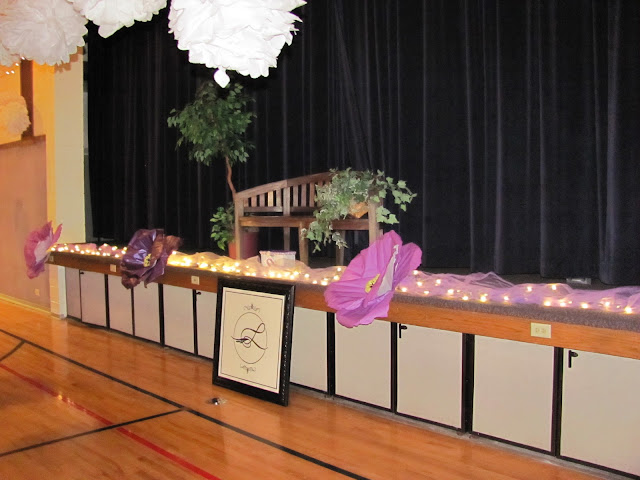 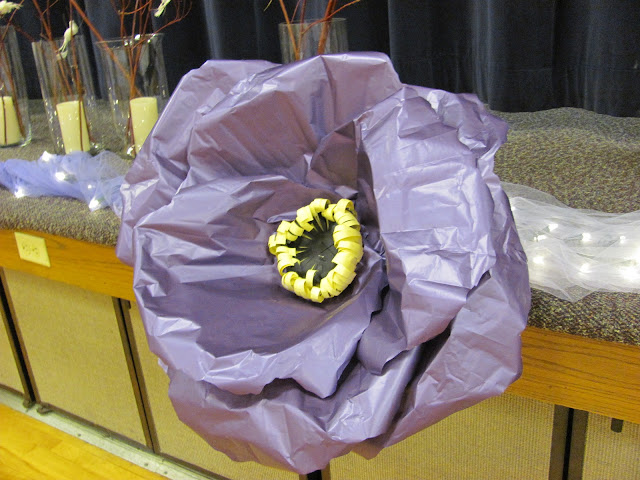 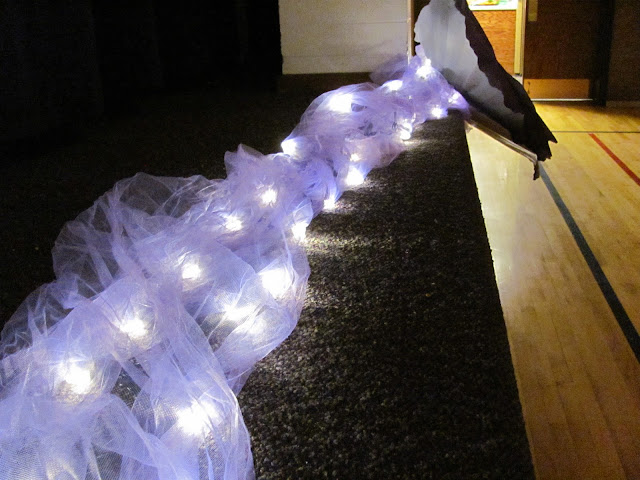 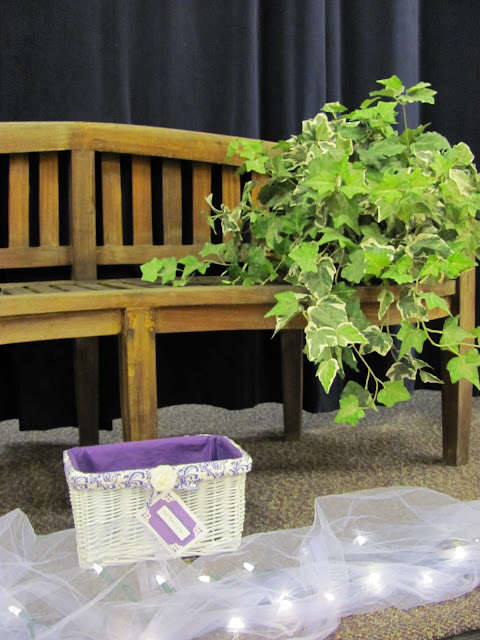 Since the gym had these large, gold dividers, I just embraced the finish and repeated the gold in 4 large frames.  I found the frames for really cheap at Goodwill and on craigslist.  I will later re-use them for my sign-making business. Two were already gold and the other two I spray painted.  I used wood underlayment to paint on the lettering (because it's cheap and lightweight.)  I painted the backgrounds purple and then hand-painted on two cute sayings.  We hung them with fish wire also. 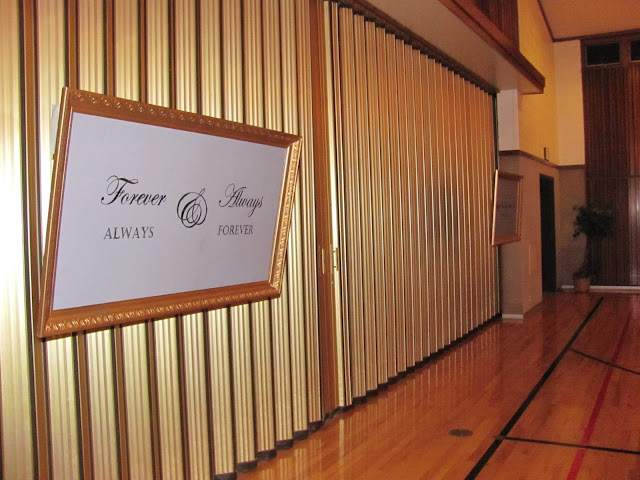 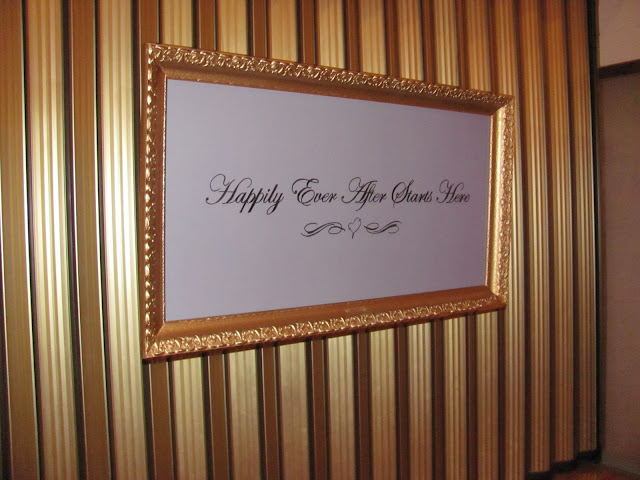 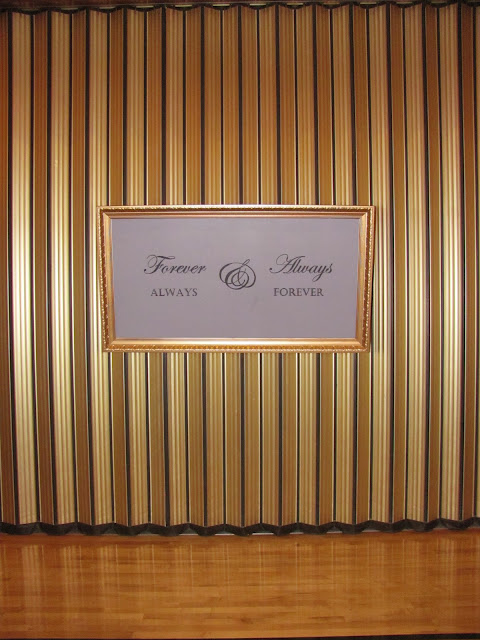 These frames look so small against such a large space, but they're actually well over 4 ft. long.  I had to pick them up with my van!  The other two gold frames I left empty.  One went behind the food table.  I used a fake boxwood wreath I already had, clearance purple ribbon from christmas and two purple monograms hung with fish wire. 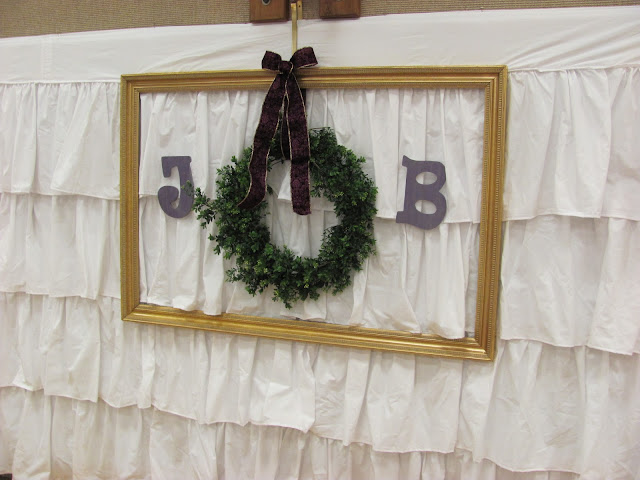 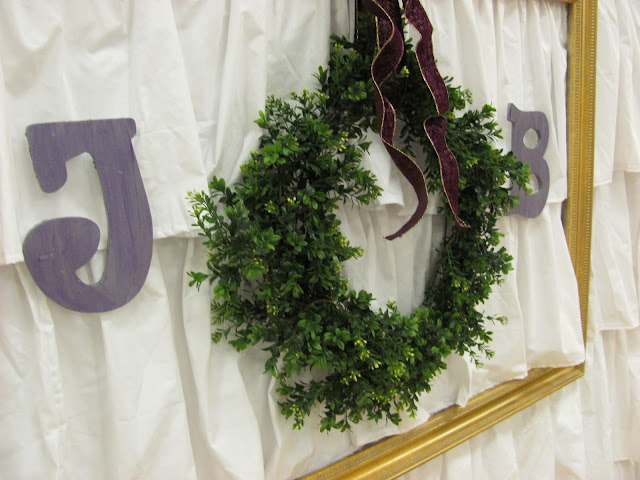 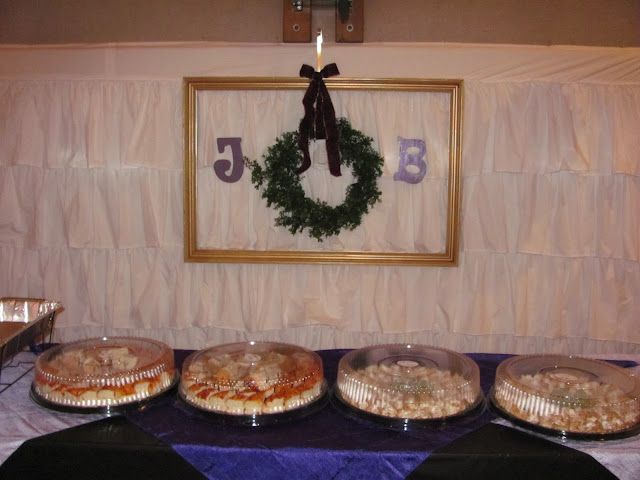 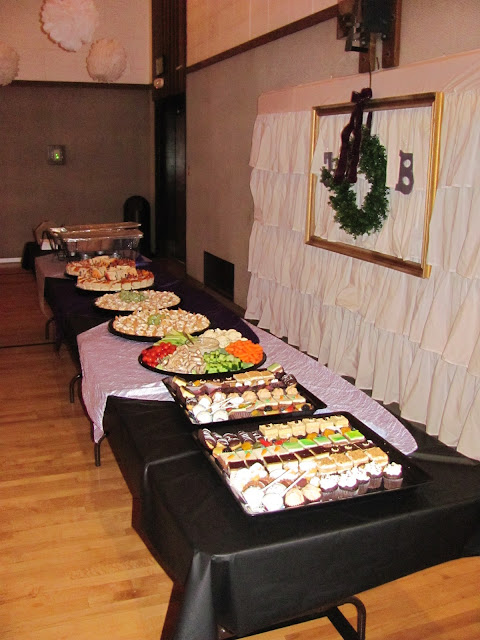 And the other Gold frame went on the opposite end of the gym.  I left it emptier so that it would "frame" the couple.  I used a rug from home to "set the stage" and a tree to soften it. 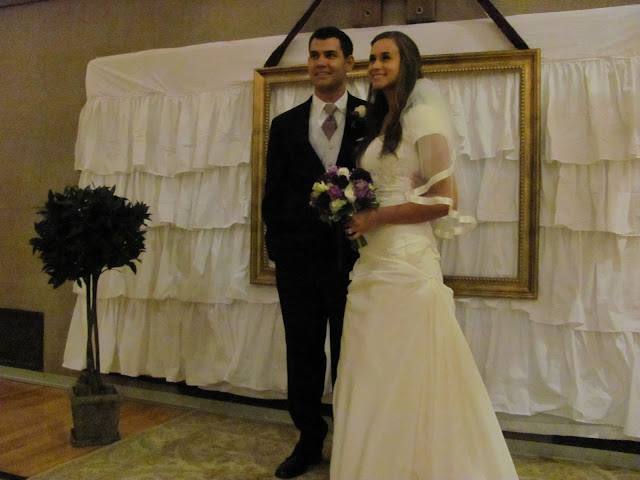 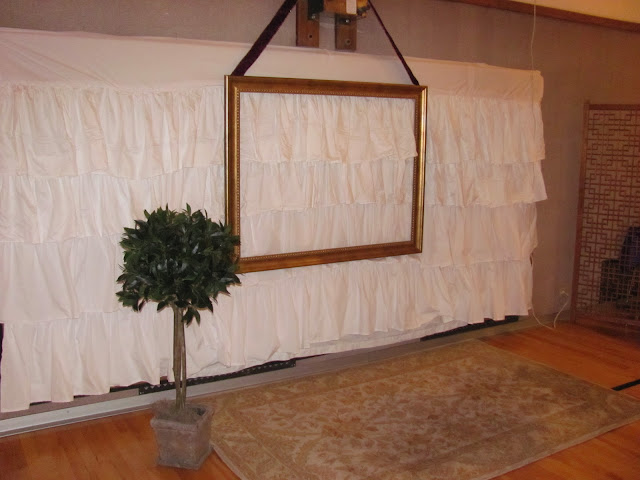 (The carpet looks dirty, but it's just the shadows. Darn it!)
The other big problem I had to fix were the ugly gym mats under each basketball standard.  They were bolted to the wall and HAD to be covered up.  I finally came up with doing an Anthropologie-style ruffled curtain.  I found Queen size flat sheets at my local Habitat Restore for only $3 each!  I used 3 sheets to make each ruffled cover.  A couple more good friends came over to my home to help me ruffle and pin them.  I'm guessing that we'll be able to use them again for future events.
Three other little areas received some love.  We had a guest book table, backed with a screen where people came into the gym (the table cloth was purple NOT blue as it looks in this shot!), 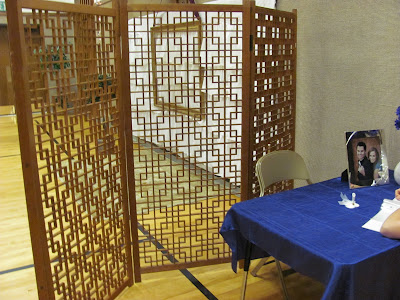 A little sign just inside the doors to the building to direct guests, 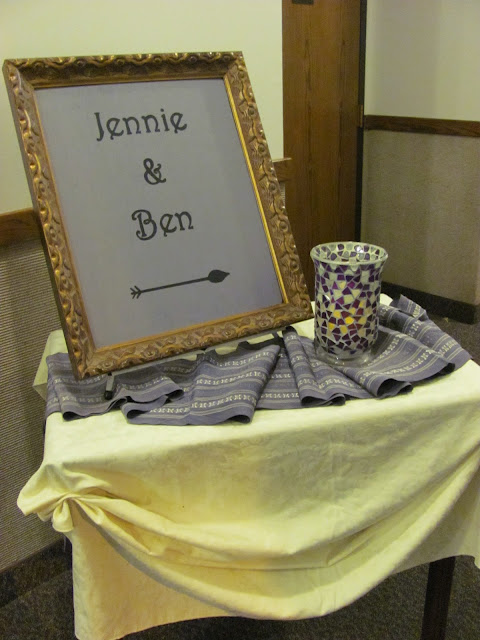 And the punch bowl table. 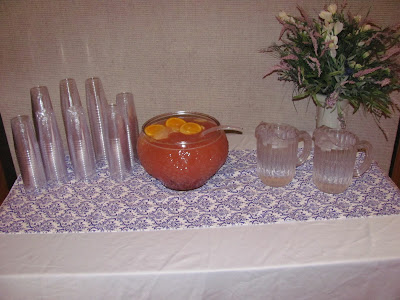 Overall, it came together like I was hoping.  You definetely could ratchet this up a few notches if it were to be a full reception.  In this case, it was meant to just be a smaller gathering for the groom's family and friends in Illinois (the weekend after the wedding and reception in Texas.) It was a really fun project to do for some dear friends. 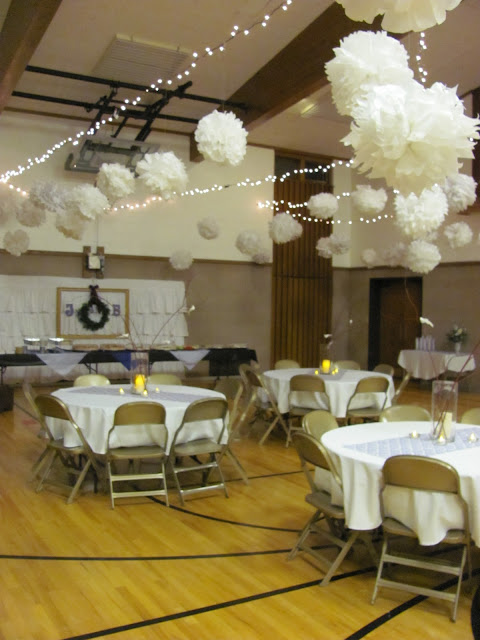