The last few months I have had a blast helping friends put together gallery walls in their homes.  Each one turned out differently and with their own personalities.

First up is AnneMarie's wall.  We had a large wall to work with behind the family room.  It was a wall in a walkway that couldn't have any furniture up against it.  I suggested making a Huge letter "J" for the family's last name to be the central anchor to the whole design. 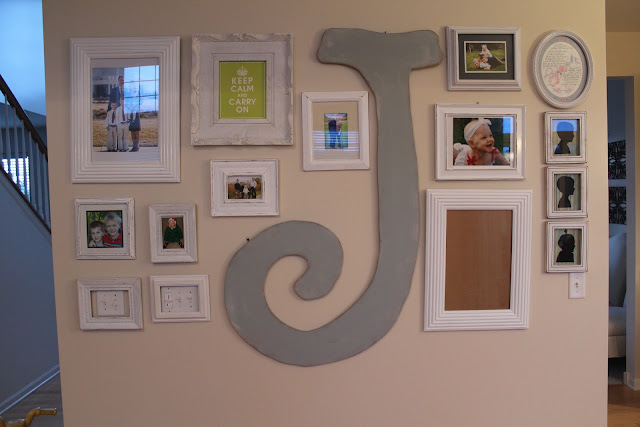 It's still being filled with pictures, but you can get an idea of how cute it looks.  We even included some sillohuettes of her kids on the right. 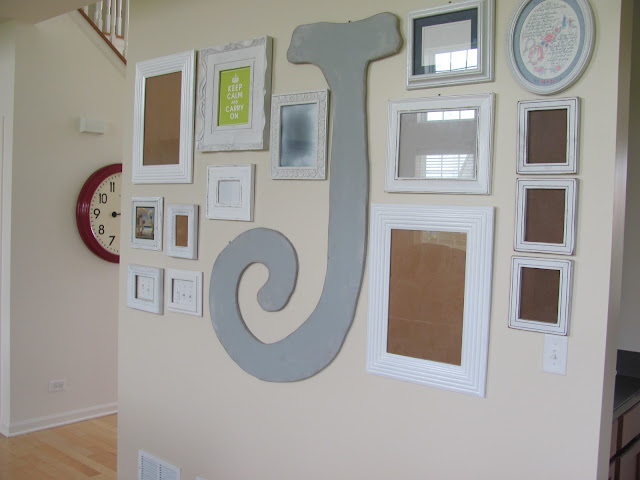 I got a large piece of MDF at the hardware store, picked a style of "J" AnneMarie liked and scaled it up with a grid (like you did back in art class.)  I then cut it out with my little Jig saw (I chose MDF because it cuts like butter and overall, it doesn't weigh too much.) It was painted a nice blue and hung with D-hooks.  It's hard to tell how big the "J" is, but it's over 5ft tall and makes just the fun, quirky statement we wanted!

We collected lots of frames, looking for interesting detail and chunky moldings to them.  We painted all of them white, distressing a few of them.  We even chose two small frames to place of the awkward light switches on the left!  It really helped minimize them. 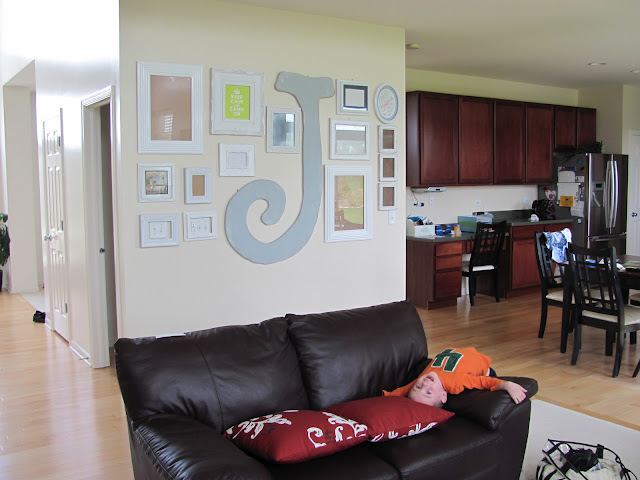 Next, was Julie's wall.  She had a nice corner wall that was visible from the front door and was screaming for something.  Once again we collected used frames and played with an arrangement on the floor that we liked. 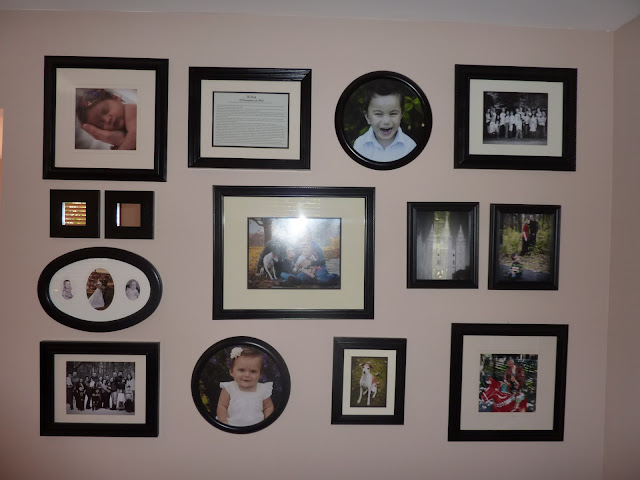 We chose an overall rectangular look and threw in some curves to keep it from being too linear.  The family photos are all captivating and make their home personal. 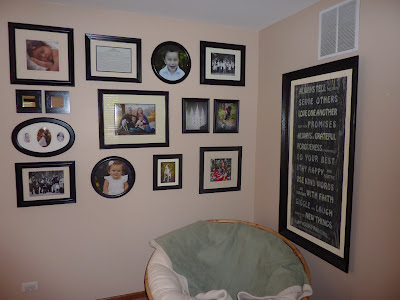 Heather wanted a family gallery wall and also hated how the television dominated your first impression when you walked in the room.  We decided to address both issues by making our gallery wall include the television to minimize it.  The eye is really drawn to the lovely family photos.  We decided to go with a few large-scale frames rather than a bunch of little frames to better balance out the large scale of the television. We did use three smaller frames within a long,large frame to add weight to them. Heather also chose photos of her kids that were big and easy to see from a distance, hence drawing in the eye better. 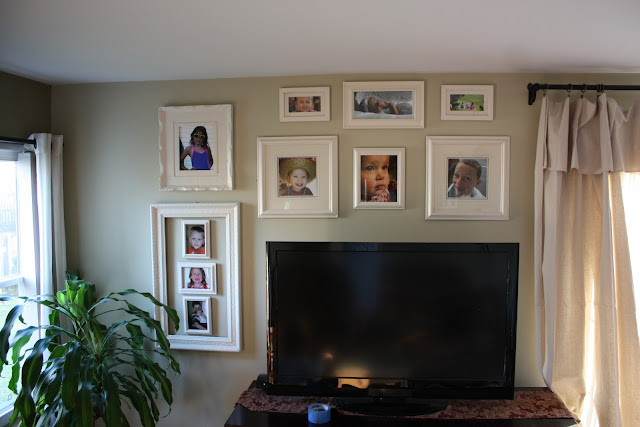 I have another friend who I helped make a gallery wall on her staircase wall.  I'll get a picture of it soon. (Hint, hint, J.!!)
Last up, is my own gallery wall that I've been working on for a while in my master bedroom.  We have large, vaulted ceilings and the wall to your right as you enter the room always seem to be begging for something.  But because it was a weird shape and was cut up by the door to the closet, it was going to be hard to decorate.  I ended up deciding to embrace the "weirdness" and go for a haphazard, collected look. 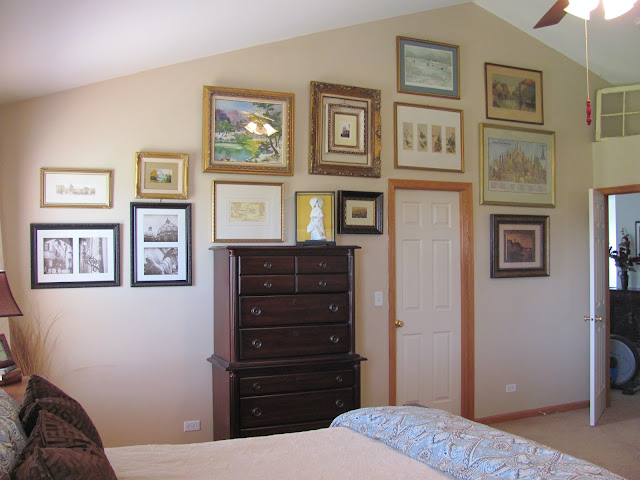 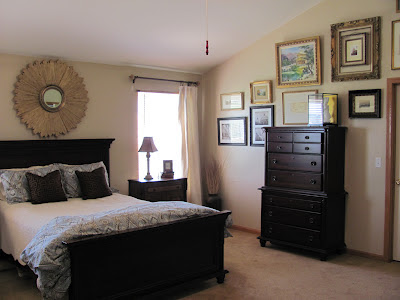 We love to travel, so I started collecting inexpensive art of places we've been.  Some were just inexpensive drawings we bought or antique postcards and many were just found at yard sales and Goodwill.  I decided to stick with the gold frames and enjoy the almost "den" or "library" feel it gives the room.  I really love laying in bed looking at it.  I'm not 100% happy with a few of the frames, so will keep looking at sales for better ones.  It's truly a "collected" work in progress! 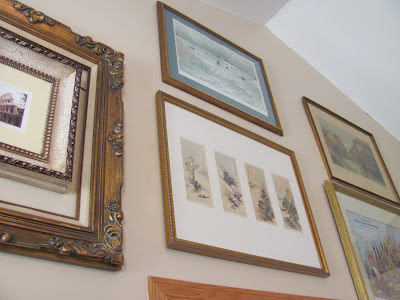 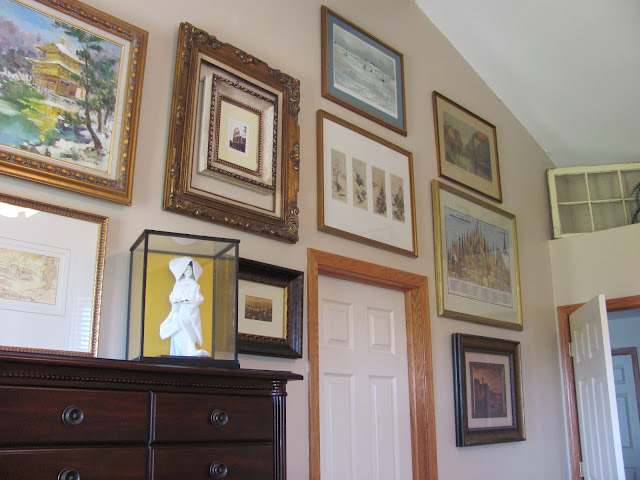 Hope you got a few ideas of how much fun, yet inexpensive gallery walls can be.
Where are you going to do one?
Posted by Erin at 10:59 PM